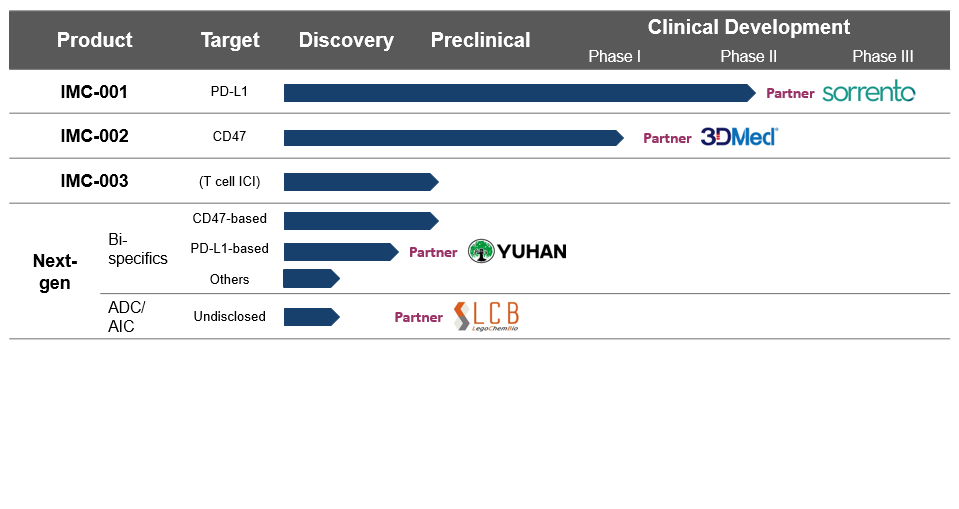 PD-L1 is a clinically validated immune-checkpoint target which is over-expressed on tumor cells and tumor-infiltrating immune cells in multiple tumor types. PD-L1 inhibits the natural anti-tumor immune response in the following ways. It prevents recruitments of new T cells to the tumor by preventing priming and activation of new T cells in the lymph nodes. Also, it deactivates cytotoxic T cells in the tumor microenvironment. Antibodies blocking PD-L1 can reactivate T-cell activity and proliferation, which leads to enhanced anti-tumor immunity.

IMC-001 is a fully human anti-PD-L1 IgG1 type monoclonal antibody which has shown promising results in terms of safety and efficacy in the dose-escalation first-in-human study despite the patients were heavily pretreated. IgG1 type antibody targeting PD-L1 on tumor enables unique combinations, such as with a NK cell-based therapy, which is unique in its property among other PD-1/PD-L1 targeting agents. We have received an approval for a multi-regional Phase II study of IMC-001 in Korea and China. 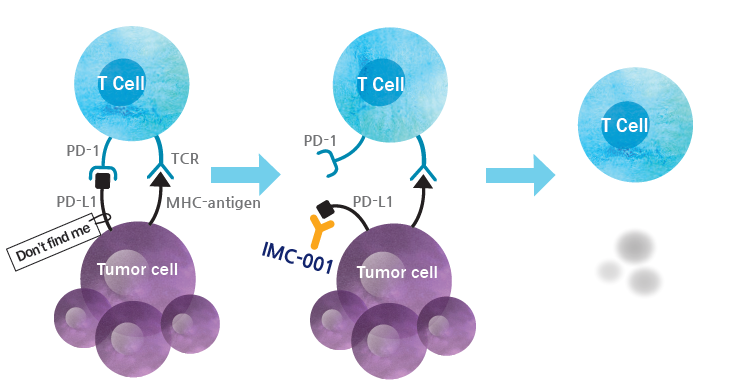 CD47 is a transmembrane protein broadly expressed on cell surface and often overexpressed on cancer cells. CD47 interacts with a myeloid inhibitory immunoreceptor SIRPα on macrophages to deliver a “don’t-eat me” signal inhibiting phagocytic activity (cancer cell killing). Blocking CD47-SIRPα interaction restores phagocytic activity of macrophages. Blocking the interaction shows a clear clinical benefit especially when combined with other agents for enhancing the pro-phagocytic signal. However, because CD47 is also expressed on normal cells such as red blood cells (RBCs), first-generation clinical-stage CD47 blockers which shows binding to RBCs were found to cause significant adverse events such as anemia.

IMC-002 is a fully human IgG4 type monoclonal antibody that was engineered to maximize efficacy (tumor phagocytosis) without causing hemagglutination. IMC-002 is highly differentiated as it does not bind to RBCs even at the high concentration of micro-molar range, which is much higher than the clinically effective level. Lack of RBC binding may improve the safety profile and the PK profile by bypassing the ‘antigen sink’ effect. FDA had recently cleared IND application and Phase I study of IMC-002 has been initiated in the U.S. for solid tumors and lymphomas.

Combinational blockade of PD-L1 and CD47 has been shown to enhance anti-tumor effects in vivo. It represents an interesting opportunity to combine IMC-001 and IMC-002 in the clinic. ImmuneOncia is also currently developing additional antibodies targeting novel immune-checkpoints.