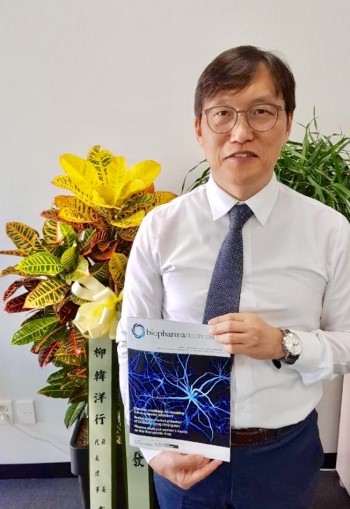 “We plan to apply anti-PD-L1 ‘IMC-001’ antibody for IND by the end of the year and enter Phase 1 clinical trial by 2018 as the fastest pipeline in Korea. Though we are a latecomer, anti-PD-L1 antibodies cannot be ignored. Immune checkpoint inhibitors such as PD-1/L1 antibodies are expected to play a principal role in accordance with the recent rise of demand for anticancer immunotherapeutics for combinational therapy. Thus, we plan to develop IMC-001 using a best-in-class strategy,” explained Cheong Kwang Ho, the CEO of ImmuneOncia.

ImmuneOncia is marking its presence in the industry with its anti-PD-1/L1 type anticancer immunotherapy drug as the first ever candidate of its type to enter clinical trials in Korea. A recent publication in Nature’s BioPharma Dealmakers introduced ImmuneOncia in its sponsor content.

ImmuneOncia has been in the spotlight ever since the announcement of its establishment. ImmuneOncia was formed as a joint venture company between Yuhan Corporation, a pharmaceutical company in Korea, and Sorrento Therapeutics, a US company specializing in antibody development. Yuhan Corporation invested a total of 10 million USD in ImmuneOncia. Moreover, Yuhan carries 51% of the shares while Sorrento maintains 49%.

Though ImmuneOncia only recently celebrated its first anniversary, it already boasts a pipeline almost in clinical phase as it spent 2 years in drug development prior to official establishment.

In the case of the first drug candidate IMC-001, Sorrento maintains rights in USA, Europe, and Japan, while ImmuneOncia has exclusive rights for all other regions. However, ImmuneOncia has global rights for the two other currently developing cancer immunotherapy drugs.

Cancer immunotherapy drugs can be administered for a greater variety of cancer types and to a wider range of age groups than existing cancer drugs. The drug lasts longer and exhibits less side effects due to lower resistance, which accounts for the popularity of immune checkpoint inhibitors in the market. An example is BMS’s Opdivo, which, after its release in 2014, achieved blockbuster drug status within just two years. It is expected that by 2020, the global market value for cancer immunotherapy drugs will be approximately $40 billion USD.

Despite the large market potential, the response rate of patients to cancer immunotherapy drugs is merely 20%. To overcome this limitation, researchers worldwide are attempting combinational therapy with other immune checkpoint inhibitors. One problem, however, is that current immunotherapy drugs on the market are very expensive. Generally, the cost for 1 year of treatment is around $100,000 USD.

Although similar drugs are already approved and on the market, ImmuneOncia is developing anti-PD-L1 antibodies due to the potential of combinational therapy. 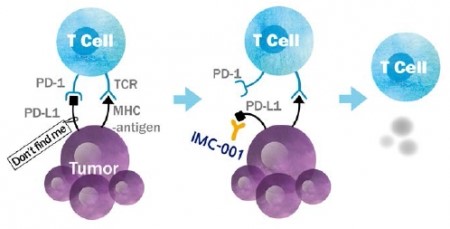 IMC-001 is a fully human anti-PD-L1 antibody with ADCC functionality. Along with inhibition of immune checkpoint molecules, IMC-001 allows innate immune cells to eliminate cancer cells via phagocytic activity. In comparison with candidates in the global market, IMC-001 has structural similarity with Merck-Pfizer’s avelumab.

Cheong states, “We plan to apply for clinical approval by the end of this year to progress to clinical trials by next year… Though we have not confirmed the efficacy on various cancer types, we are keeping in mind of the high number of stomach cancer patients in Korea.” Thus, ImmuneOncia plans to use the global network to pursue a best-in-class strategy.

Commercialization and marketing in Korea will be handled by Yuhan Corporation, while marketing in other regions, still in consideration, may be managed by global partners.

ImmuneOncia anticipates the pipeline ‘IMC-002’ to have global potential. IMC-001 is a fully human antibody that targets CD47, a high-interest target in the global market.

Cheong states, “Global pharmaceuticals that have PD-1 and/or PD-L1 antibodies do not have this pipeline, and so IMC-002, despite its early stage in development, already received great interest from multiple companies… our goal is to use a first-in-class strategy to finish the preclinical stage quickly before the end of next year for expedited entry into clinical phase.” To accomplish this, they are collaborating with large Korean companies to quickly develop cell lines and produce antibodies.

The key interaction occurs between CD47 on tumor cells and SIRP-a receptor on macrophages. Anti-CD47 antibodies inhibit the signal transduction pathway and activate macrophages to eliminate cancer cells. Patients with poor prognostics generally have greater expression of CD47. Interestingly, recent research claims that macrophages play a key regulatory role in cancer biology. Moreover, activation of phagocytic activity is not the sole factor, as it was reported that inhibition of CD47 allows dendritic cells to increase T cell’s anticancer activity.

Cheong explained, “IMC-002 is fully optimized for human CD47 to allow significantly increased affinity, and we have confirmed that hemagglutination, which may cause anemia and thromobocytopenia, does not occur.”

ImmuneOncia is also developing another immune checkpoint inhibitor IMC-003 (classified) monoclonal antibody. Moreover, it is developing the pipelines IMC-2101 and IMC-2102, which are chimeric bispecific antibodies that target PD-L1 and another synergistic anticancer target. The bispecific antibodies are currently in early platform development stage.